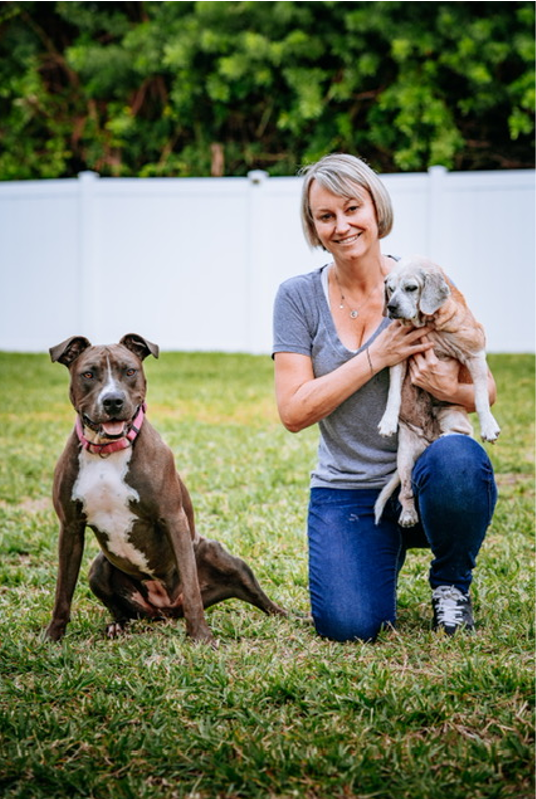 Wendy started her rescue career in 2005 and has fostered over 100 dogs out of her home.  Upon moving to Melbourne Beach from Syracuse NY, Wendy became a volunteer at South Animal Care Center in Brevard.  She witnessed first-hand how many senior dogs were being surrendered, left stray out in the community, and were  languishing in their kennels on hard cement floors.  Many of these dogs were in desperate need of medical care, or in danger of being euthanized. This experience ultimately led her to start a new Non-Profit Organization dedicated solely to saving senior dogs from shelters or other inhumane situations.  Touch of Grey Rescue (ToG) was formed in February 2019, with Wendy as President and a team of other passionate volunteers.  With these women by her side, ToG quickly grew beyond what she ever thought possible.

Wendy lives in Melbourne Beach with her husband Pete, daughter Jenny,  2 rescue dogs and 1 rescue cat.  Tucker, their frosty-faced senior lab/beagle mix, served as the inspiration and brand ambassador for Touch of Grey Rescue and the model for their logo.  Tucker passed away in June of 2021 at the age of 17, which further inspired Wendy to continue her mission to give that same quality of life to other senior pets.  Wendy is also the author of an upcoming children’s book series based on real life rescue dogs and their stories of redemption.  Wendy’s first book “Farkle Finds A Furever Home” is based on the true story of her narcoleptic rescue dog named Farkle. 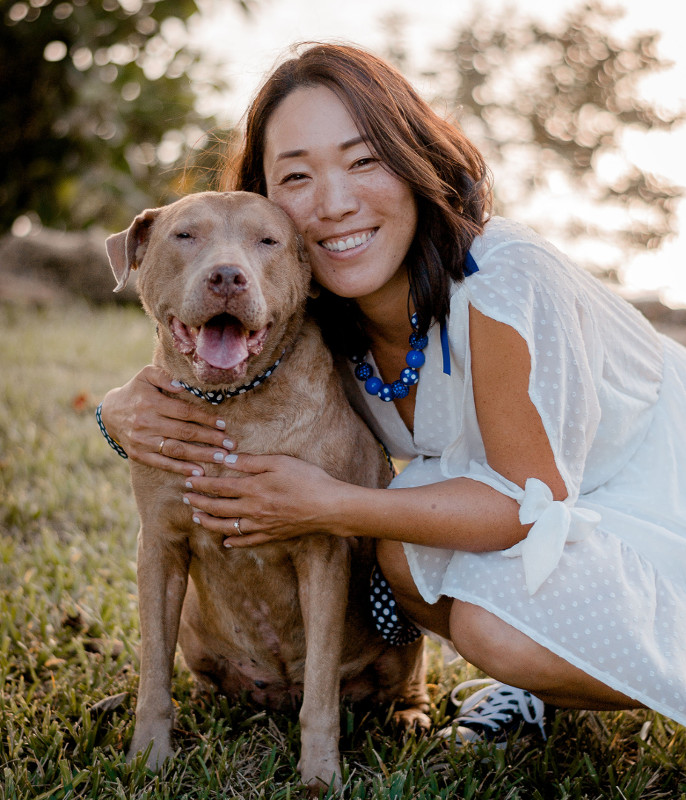 Misaki lived in Japan and worked at veterinary clinics prior to moving to the United States with her husband, who was relocated with the U.S. Navy. Misaki fostered dogs for San Antonio Pet Alive in Texas, before moving to Brevard County, Florida in 2016. Upon her arrival, Misaki enrolled to volunteer at the South Animal Care Center in Brevard. She volunteered at the shelter for four years, showing up consistently more than three times weekly to ensure dogs got adequate potty breaks and socialization. She walked over 100 dogs every month and used her iPhone to capture the most adorable photos which promoted these shelter dogs for adoption on social media. This volunteer experience ultimately changed Misaki’s career trajectory and led her to start her own pet sitting services company, Home Buddy. Misaki and her husband are the proud ‘pawrents’ of a rescue dog named Dolly, who was at risk of being euthanized at a shelter due to length of stay and her need to be the only pet in the house. Although Dolly prefers to be the queen of her castle, Misaki manages to help quite often with fostering dogs on a temporary basis for Touch of Grey Rescue, taking great care to keep the dogs separated.

As a part of the Touch of Grey Rescue team, Misaki is our eyes and ears at our local shelter putting senior dogs on our radar. She takes photos, helps promote them for foster, and coordinates rescue missions. Misaki is accredited with starting our Doggie Uber transport service that gives shelter dogs their freedom rides home! She also serves as our Intake coordinator, entering information on each rescue into our tracking system, processes appropriate paperwork, manages microchip transfers, and much more. Misaki also hosts online auctions and attends the majority of our community events. There is no rest for this ultimate ambassador for the ToG dogs. Words of wisdom from this integral part of our BOD; “Being a part of this great team has given me so much more to help the voiceless, homeless dogs. When we started out in 2019, we had no idea that we would save over 200 dogs in two years. And I am confident that we’ll keep growing and do many more great things for these dogs, working together with our volunteers, supporters and donors!” 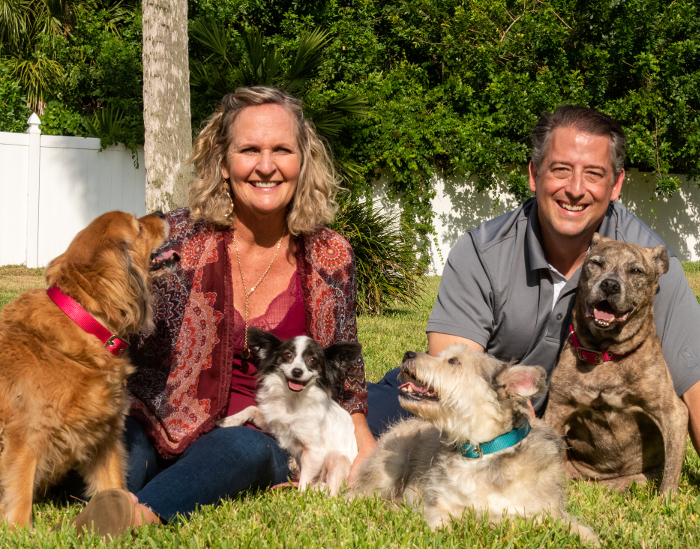 Kim moved to Florida from Ohio 26 years ago.  She has loved animals her whole life and always wanted to get into helping a rescue.  Her rescue journey began when by chance she met Misaki who told her about Touch of Grey and rescuing senior dogs.  A few weeks later Kim and her husband Sandy had their first foster dog.  Since then she and her husband have fostered many dogs for Touch of Grey and have also adopted four.  Kim says they are hooked on helping senior dogs.

Kim is the Adoption Coordinator for Touch of Grey.  She loves meeting new people and finds it so rewarding to help them find their furever senior friend. She also loves breaking the dogs out of the shelter, helping hospice dogs, taking new dogs to the vet, working with foster parents, volunteering at fundraising events and whatever else she can lend a hand doing.  Kim says  "I never get tired of helping senior dogs.  They have so much love and life left to give, even the hospice dogs.  The love of a senior dog never gets old to me.  These senior dogs Touch of Grey rescues have changed my life in so many amazing ways." 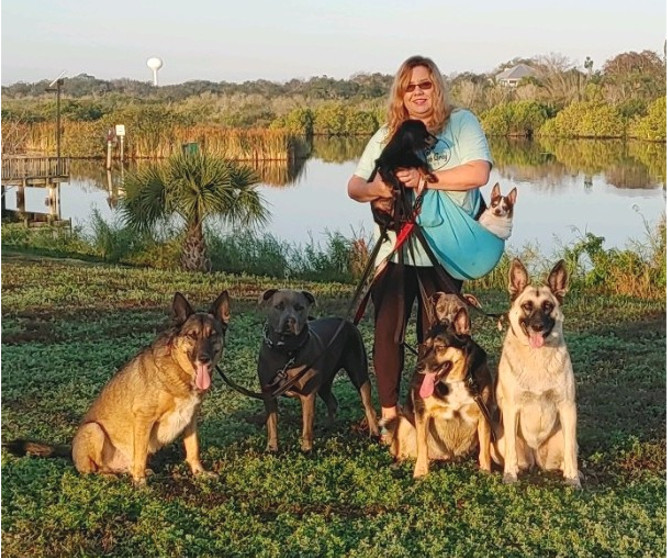 Ashley was born and raised in Brevard County. She began volunteering with Touch of Grey a few months after it started and has fostered for several other rescue organizations. Her passion for animals comes from her Grandmother Linda who always made sure there were furbabies around to love.  While with Touch of Grey Ashley has done a little bit of everything, helping as needed. Foster coordinator has been her biggest role where she works to pair people with the right dog.

She always says if this could be her full time job she'd leave her actual one in a heartbeat. She has two beautiful pitties of her own that just love to welcome new foster pups and kitties into their home.